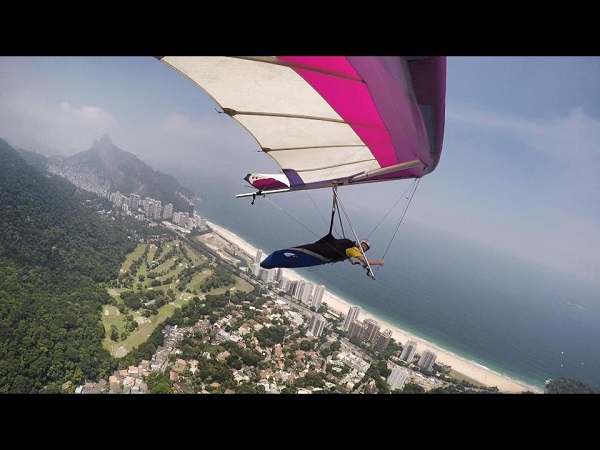 On Thursday 4 February 2016 I made one of my dreams come true during two great hang gliding flights above the blue skies of Rio! Please see my short video here!

Over a year ago I saw great footage from hang gliders above Rio de Janeiro and specifically Corcovado on You Tube. This is the mountain with the impressive statue of Jesus overlooking Rio. As I planned a trip around the world, including Brazil, I thought I’d give it a try and see if this was possible for me too. Bringing my own glider on this trip was impossible (too short notice and not practical). I posted a question on a Dutch hang glider community to see if someone would be able to help me renting one. Quickly thereafter Leonarda Beltrao contacted me. She and her father are dealers in hang gliders and through a friend of her, I could rent a single surface glider. Please see her website here. Next to that, I had to bring my own harness – which I did of course. The key reason is that in our sport, you want to have a minimal amount of changes during your flight. The new location, including the sea, a landing at the beach and a new glider is already more than enough change.

After several emails up and down it became clear that the Corcovado was very difficult to reach during this time of the year. The main reason is that not much thermals are expected. Next to that it seemed to be a very technical and difficult route to fly. If you would be able to make it to Corcovado, the way back to the landing site (the São Conrado beach) seemed even more difficult. This was not an issue for me, as even flying here was a dream, so I let it go. It had to work in the first place and I had only one day in Rio. There were many other hurdles to be taken before I would be able to fly.

I was lucky that my round the world ticket was cheaper when flying via Rio towards Auckland, New Zealand. This was another important step in fulfilling my plan. The evening before I flew from Sao Paolo to Rio I made the arrangements with Leonarda for a pick-up at 10.30 from my hotel. The drive from Copacabana to São Conrado beach took around 45 minutes. When we arrived at the landing area I saw several gliders in the sky and dozens of tandem hang gliders on the ground. I got even more exited, it was really going to happen! First I had to register and I noticed that at this beautiful place only a very few pilots flew by themselves. The people at the registration desk were not that active and helpful to provide me with the documents required. With the help of Leonarda and some tandem pilots I finally managed. I walked back to the landing area. Looking at this totally white beach, it all looked too good to be true.

We attached the glider on the roof of the car and drove up the mountain. Close to the exit point there were some (strong) boys waiting to carry my glider for the last 100 meters up the mountain. I was happy that they were eager to bring them to the designated take off area for just over one euro. The circumstances were also quite challenging with a temperature of 36 degrees and extremely high humidity. The owner of the glider was also up the mountain and he put up his glider for me (Lucky me!!). Next to me there were lots of other (only tandem) pilots who were rushing to take off with their passengers. As it’s their business they would like to make as many flights as possible per day.

The glider turned out to be quite old, but as the owner told me he flew regularly with this glider I was convinced that it would be safe. Next to that, I did thorough pre-flight checks and it all (including some customized fixes made :-)) looked good to fly. At the moment I was ready to go, instantly and fully by surprise, the mountain became completely covered in a large cloud. I remembered that Bob Koenders (a famous pilot from the Netherlands) informed me about these clouds some weeks ago. Years ago has been here too, but he was, due to these clouds, unfortunately not able to fly. The other pilots convinced me that in about one hour the clouds would disappear and it would be OK again to fly. They expected that the wind from the sea would pick up and this would clear the skies again.

They were right! After fitting my harness and switching on my three HD cameras I was ready to go. Lucky me that I added three, as two of them (both a GoPro) stopped recording just before and after take-off. I think they did due to the high temperature and the extreme humidity. Only my recently bought Garmin VIRB XE kept recording my flights.

Due to the fact that I was the only solo pilot I was allowed to line up in between the long line of tandem pilots. After a so called “hang check” I walked towards the ramp and a few seconds later I was all by myself in the great skies above Rio. This has been for sure one of my most impressive views ever. The city below, fresh green forests, dark rock mountains, buildings, a deep blue sea and white beaches. It all was extremely overwhelming.

As expected there were no thermals to stay up for a long time. I flew towards the beach and a small hill into the Atlantic Ocean. After some turns and a nice approach over the sea and the beautiful hill I landed (without having wheels) softly on my feet right in the middle of the designated landing area. I will never forget the great feeling inside and the BIG smile on my face. The owner was also at the beach and he offered to quickly pack the glider, so I could go up the mountain one more time for another beautiful flight.

This time the weather was even better and the view was again astonishing. Also this time I flew just over 7 minutes and landed perfectly on my feet in front of the designated packing area. With a big smile on my face I walked up the small boulevard and bought some drinks. While overlooking the great beach, blue ocean and watching several other gliders during their landing I felt so privileged that I could experience this adventure. It all looked like a dream, but I knew it was not!

Below you will see some pictures and please click here for a short video on YouTube. If you are interested in flying above Rio too and/or would like to know more, please contact me below. I am happy to help you out with any additional information. 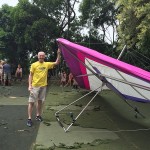 At the start above Rio 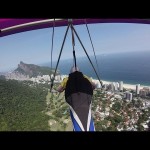 Rio de Janeiro from above 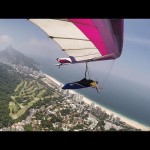 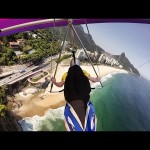 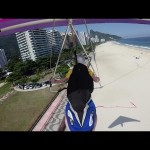 Landing at the beach

Some of my hang gliding flights.