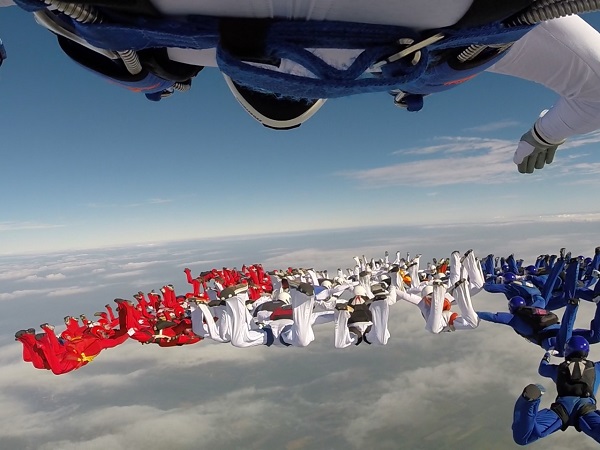 In this blog I gave a daily update on our skydives, including photos, video’s and two interviews on Radio538. Please enjoy!

For the full explanation of our goals please click here

I just uploaded a nice compilation of our 84way. We were all in the formation, but unfortunately also two wrong grips. Please click here to watch the video.

Unfortunately we did not break the record, but we will be back! (please see below some great pictures)

Today we made five skydives (for a total of 13). We have never been so close to breaking the record. In four skydives we made a 83 (out of 84) way and one was complete, but two skydivers had a wrong grip…

This morning Herman mentioned that it’s normal to break a record on the final day of record attempts. I totally agree, as this was also the case with the World Record of the World Team in 1999, where I was present, and several times afterwards too. Herman pushed us to move ahead and perform just a little better than how we finished yesterday. Some changes in the planes were made. My piece partner and I moved from the Skyvan next to the base plane to the far left Cessna Grand Caravan (plane A). As I was one of the last divers, I was sitting on a small bank close to the pilot. This position gave me a great view, enabling me to see all planes flying so incredibly close to each other (respect to the pilots!). I also had to turn on the oxygen in the plane, which was very helpful for us to stay alive 🙂

The first skydive was not that solid and again we needed some adjustments in the team. The second skydive was a good one, but again we missed it by one person. We all knew it would happen soon….

The third skydive was really great. We all were in the formation and I was sure that we had our so desperately wanted Dutch National Record. I shouted out under my canopy, and also on the ground many of us were very excited. Even when Henny came back he was excited too that this could be “the skydive”. Some minutes later some skydivers came back with a story that “someone felt a wrong grip”. Why oh why did he not kick the grip (the hand) away from his leg if he knew it shouldn’t have been there? After the judged were finished, it indeed proved to be the case and the positive atmosphere decreased dramatically. Soooo we had to go up again…

The view above the skies was too beautiful to describe (see some pictures below). My dive, approach and docking to the formation was an experience I will never forget. All the red, white and blue suits including one orange and the crystal white clouds below looked surreal.

Skydive 4 was a good one too, but again another skydiver short (blue sector). Again we had some energetic speeches from Herman and “up we went” for skydive number 5.

This final skydive of the event was also “nearly perfect”. Again we jumped above a sheet of white clouds. I can still see the picture in my mind of Henny going under the formation for one of his best shots, but… unfortunately, there was a red suit under the formation too 🙁

Nevertheless the event was absolutely fantastic. It was organised “over the TOP” (BIG video wall, breakfast, lunch and dinner, colour coded suits and helmets, planes etc.)

I would like to thank Henny Wiggers, the organisers (Herman, Joost and Marloes) and all other volunteers to create a skydive event that has never been done before! 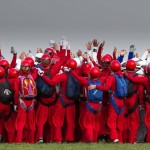 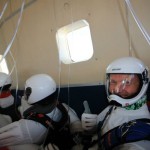 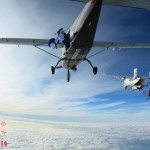 My exit from the A plane 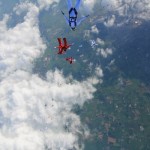 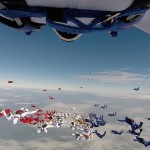 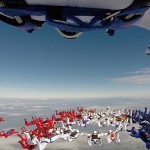 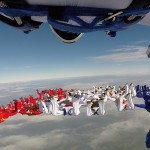 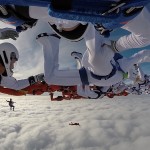 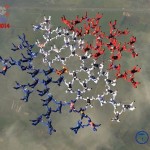 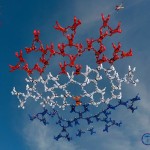 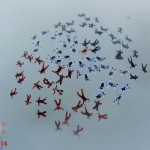 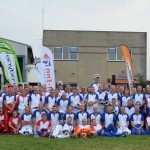 For the third day in a row we had to be present and ready at 7.00 am at the drop zone. For me that meant waking up at 5.15. Again some changes were made to hopefully create the best possible team in the air to set ASAP our final goal: to build the “desperate wanted” 84 way!
The current weather is not helping us (rain and thick cloud base), so ware are on a stand by. This means watching the yesterday’s videos and coffee, coffee and more coffee. We expect that the weather will improve later today and tomorrow.
In the afternoon we made 4 skydives and during the day the skydives improved rapidly. The last two skydives we managed to make a formation with 83 (out of the 84) people. In both skydives only one of our friends was below the formation. One of them was my peace partner. During all skydives before we were always both in the formation, unless it was not possible due to a missing “anker”.
The energy in the team is still very good, so in my opinion there is a good chance it will happen tomorrow!
Tomorrow: D-day it is!! 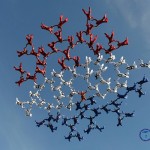 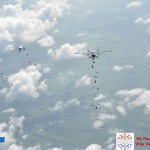 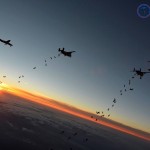 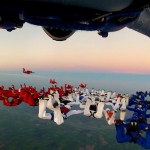 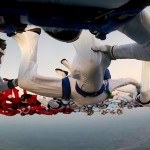 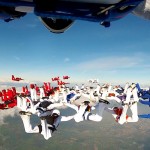 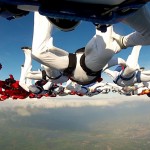 My friend is low

This early morning Radio538 (DJ Gert-jan van Ackooij) called me back to receive the agreed update of our 1st day of skydiving. Please hear below the interview from day 1.

“The pressure is on” 🙂 This morning the team captains changed about 12 slots (read peaces of the puzzle/formation/”stroopwafel”) with about 10 new people from the Alfa team and 2 skydivers had to take different positions. This had immediately a positive effect as the 1st skydive of this day was really much better than yesterday. The second and the third skydive improved even more, with only a few changes in the formation. I think that about 7 to 9 skydivers were just outside or below of the formation. Just before sunset we “went in the blue skies again”, but at around 9.000 ft (3 Km) Schiphol air control decided that we not allowed to fly with our 5 planes to the required 18.000 ft (6km). So we had to go down with all the planes. As we all prefer to jump from planes it was quite scary to land with an perfectly good airplane 🙂

Tomorrow morning we have again a very early call, 7.00 back at Teuge with your gear to be ready for a dirt dive. We will take off at 8.00 hours sharp for a new and hopefully sunshine day to set this new Record ASAP!

The energy is good and we all are ready to break the Dutch National Skydive Record tomorrow! 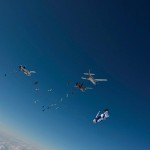 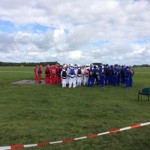 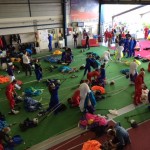 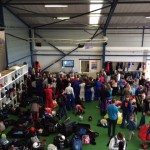 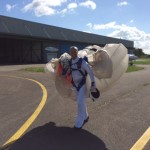 Early this morning we had an extensive 1,5 hour meeting about ‘safety, safety and safety’. It’s very important that we all stay safe: with the amount of people (84) in the sky we have to be extra careful. Meaning, how to use the oxygen in the plane, the exit from 5 separate airplanes at the same time, diving, approach to the formation, flying in the formation, tracking away from the formation, opening your parachute, fly your parachute and landing. Although we are with the most experienced skydivers of the Netherlands all has been discussed at a very detailed level. We cannot be careful enough!

After this briefing we had a one hour dirt dive (practicing on the ground), so we all know the “stroopwafel” formation and our exact position in this formation.

The weather was unfortunately not very good, so we only made one skydive today. We did not succeed and as it was the first time, we had a lot of points to improve. Like; wait for your time to dock the formation, fly as fast as the formation it self, be precise etc. What went well: the planes were very close to each other, the majority of the skydivers were (timely) close to the formation and last but for sure not least we all landed safely!

Tomorrow we will have a very early start (7.00 hours ready to dirt dive), so time to go to sleep.

We all know we still have 14 skydives available to succeed!

This morning I had an interview (in Dutch) on Radio538, please listen below (start sat 1.30) 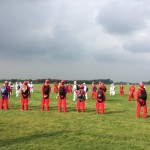 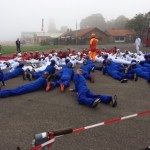 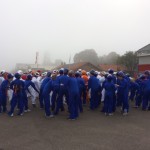 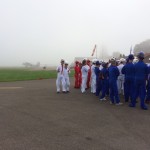 With my docking mate Laurent.