This is my diary about my most exotic skydive adventure! Above, on and underwater of Paradise Palau.

Please see here a compilation of some of my Formation Skydives above incredible Palau.

Please see here a 1,5 minute video of me hanging under a helicopter.

Palau (a county in Micronesia) is located in the Pacific Ocean, north of Papua new Guinea. Please see here  for more information about beautiful Palau.
I am currently flying above the Caspian sea, 4,5 hours on my way from Amsterdam to Bangkok. It will be quite trip to reach one of my most ultimate tropical skydive destinations above the great skies of Palau. First to Bangkok (11 hours), after a short refuel to Taipei (3,5 hours) and finally, after one night in Taipei, to Palau (4 hours). I am sure that, when I have made my first skydives above beautiful Palau, this long journey will be worth it….
Last summer I made up my mind to kick of my 2014 skydive season somewhere outside Europe to escape our winter. Although this year we hardly had winter in the Netherlands, I am happy that I am on my way to a new “skydive paradise”! Together with my wife and 4 years old daughter.
I feel lucky that, during my 33 years in our sport, I have made many great skydives above various beautiful tropical locations, like Uruguay, several locations in Thailand, Ecuador, Australia, Dominican Republic, Philippines, South Africa and New Zealand. This location (frankly speaking I had not heard of Palau before :-)) will be one of the most special locations where I will skydive. In my second chapter of this blog I will hopefully have some beautiful pictures and a real skydive story. If you would like to see some nice pictures and short stories from my previous skydive trips please visit my personal skydive page and “world map” on my website page about skydiving here.

30 March: We arrived in Palau! During the landing we already saw many small and green islands in a crystal blue ocean, what a great view! Two days of snorkeling, swim underneath a beautiful waterfall and eat delicious Japanese and Thai food, what else would you do in paradise……? 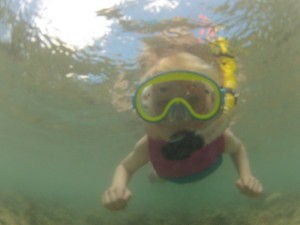 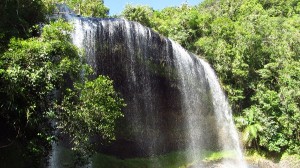 2 April: 1st day in the skies of Palau. We started one day earlier due to expected heavy weather later in the week. Rich Grimm and Navot Bornovski (boogie owners): “it’s all about safety (landing pattern, opening above 3000 ft no swooping etc.) as we, like normal in these unexplored tropical skydive environments, you do not want to visit (the only) hospital here.” (Never of course). The DZ is located at the international airport as all airliners come from abroad. This means we have an enormous DZ available. 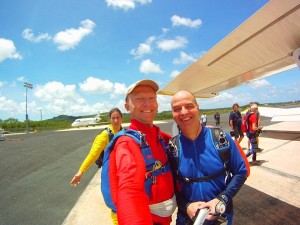 My 1st skydive is a nice and simple 13point 4 way. The view is extremely impressive with many green rock islands underneath! If you check Wikipedia here and “google” on pictures: “world heritage rock islands Palau”, you will know what I mean.
2nd jump with organizer Regan Tetlow from Empuria. We made a nice 6 way with 9 points including star star. Watching the other star turning above this astonishing environment made us all smile like…….
The pictures below are from my own inside camera and hopefully tomorrow we will have footage from above.

During load 11 the engine of the PAC broke down, so we had to stop jumping, BUT with a helicopter on stand by Rich and Navot changed their plan immediately! Flying above the famous rock islands and leaving the helicopter at 5000 ft is a perfect idea too! Herman Landsman (exotic sky adventures) would make his well known statement: “it’s an adventure guys, so we all have deal with it with a positive mindset”.
Mike Oolman, Edwin Lebrun and I manifested directly for heli 3 and the pictures below showed we are really heaving fun! To hang underneath a helicopter is not my daily activity. 🙂 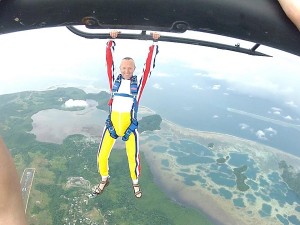 I look forward to experience the other days, including a beach jump including BBQ at another “famous” World War II island named Peleliu.
Some boogie facts:
Plane: PAC 75 from Guam
Skydivers: 60 from 15 different countries and a total of 81 participants
Loads day one: 10 PAC 75 and 7 helicopter loads
3 April, skydive day two:
Today we broke the FS Palau record to 11 skydivers!
After a stall and two of us tumbled on our back at the end of the PAC, we were able to make the largest formation ever above Palau. The formation contained skydivers from: Canada, Sweden, The Netherlands,, UK and the USA. After Uruguay and Dominican Republic this was for me the third FS record above a tropical location.
Next to this nice skydive Edwin and I made another great “chopper hang skydive”. We had a lot of fun and picture (and videos) say more than thousand words.
Tomorrow we will skydive including a beach BBQ on Peleliu!
4 April, Palau skydive day three:
THE day to jump at Peleliu!
In the morning we first made a nice 9 way with the always smiling Regan 🙂
The thorough briefing including the first stories about what has happened on the Peleliu Island, was already quite intense. Every one (54 skydivers in 4 loads) who manifested to make a skydive on the Island got very excited. First a helicopter was send out (in case of an emergency) including three skydivers. They made “a base camp” including a fire so we were able to see the landing direction from above.
I was on load three. The 30 minutes flight to Peleliu, over the famous Rock Islands was incredible. Exit at 6500ft and what a view! 99,9% of Forrest, Mangrove, Blue Ocean and 0,1% the World Ware II landing strip in the middle. I have never seen this during my 33 years in our beautiful sport.
Packing in the bush, waiting for the others, a beer and tour around the island. We saw the Japanese tunnels (they never surrender!) About 13k soldiers died in this horror battlefield.
If you would like to know more about the incredible battle please check here: 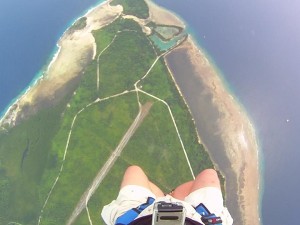 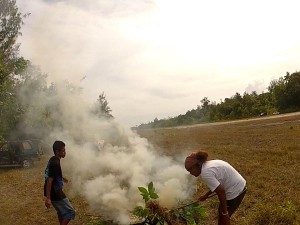 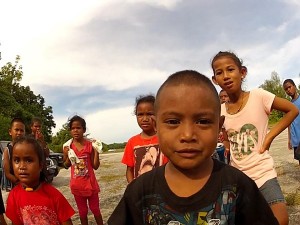 Afterwards we all went by boat to another impressive island including a swim, drinks and a great BBQ party at the beach. When it was completely dark we left with 5 boats back to Palau. This was a 45 minute boat ride with millions of stars above!
5 April, Palau skydive day four:
Yes!! We broke the FS record above Palau again. It’s not that difficult to brake though :-). We just made a three point 12 way skydive! I was very energetic (a little bit to much 🙂 with my shaking my head to move to the 4th point to Regan, that I lost my helmet including camera in mid air. 🙁 What’s left are great pictures and a smile. 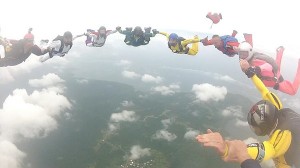 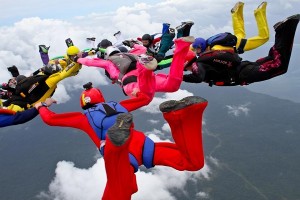 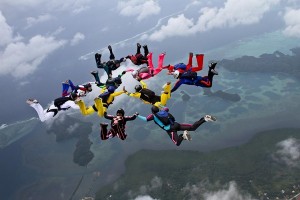 In the afternoon a small storm arrived and after two skydives we had to stop skydiving and also the 7th the storm will be above Palau.
7 April, “Skydivers diving day”:
Due to the fact that the weather did not clear up, I and around other 30 skydivers decided to book a diving and snorkeling trip. After a 45 minutes boat ride we reached a reef in the middle of the ocean. The wind was quite strong and rain was coming in. The snorkelers stayed on board we left the boat to explore the view from below. Palau is very famous for divers and they were right. What a colorful beauty below, including hundreds of fish, sharks, turtles and more. The reef with an incredible drop off looked reaching a mountain cliff for a BASE jump. 🙂
When we came back to the boat above, we arrived in very heavy weather conditions. A severe thunderstorm including strong winds, heavy rain and a lot of thunder closed by in the middle of the ocean. As this did not look good, we moved ASAP back to the shore. My daughter, and several others were very seasick and the 45 minutes boat ride back was another (this time not so nice) adventure. 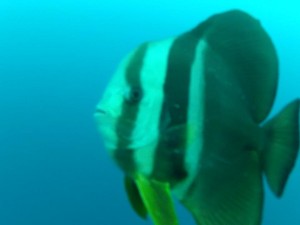 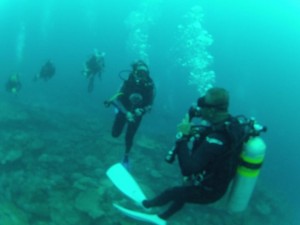 We all were happy to be back in the hotel to watch the beautiful footage from this very rough experience.
11 April, we made two helicopter flights over the rock islands!
Today we (the only two Dutchies and family) made two amazing helicopter flights over the rock islands. The trip showed dozens of Rock islands, reefs, lakes, the purple blue pacific ocean and much more. I have never seen an incredible beauty like this from above. With a go pro attached to the front of the helicopter and one on a stick (filming outside the Helicopter without doors) I have made very spectacular footage. 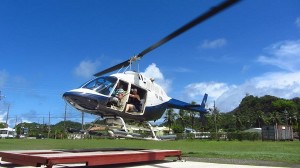 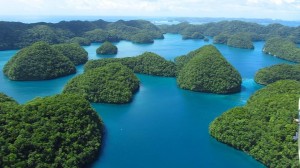 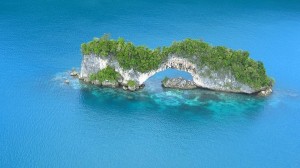 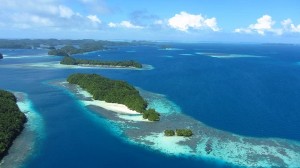 12 April Looking back
I am now on the first (Palau – Taipei) of the three flights back home (the Netherlands). I remember my remark in my 1st blog on my way to Palau: “That I would be sure that this very long journey would be worth it.” AND YES IT WAS!!!!
Palau is really a unknown (at least to me it was) paradise far far away. The shortest flight to reach Palau is around 4 hours and there are only two or three flights a day, from Guam, Manilla or Taipei.
With the 60 skydivers from 15 countries we unleashed the beautiful sky above Palau. The whole experience has been overwhelming with incredibly beautiful views and new experiences. Not only from above, but also on land and underwater. The hundreds of green rock islands in the very blue Pacific Ocean, created an unbelievable paradise on earth.
Looking back I am very happy that I made the decision to be part of this skydive Party in the Pacific as I/we:
– Changed the FS record from a 2 to a 12way
– Have been hanging on the skit of a helicopter
– Had a party and BBQ at an uninhabited Island
– Met several new skydive friends
– Walked under a beautiful waterfall
– Seen thousands of fish with our daily snorkeling activity
– Made great scuba dives
– Experienced a thunderstorm on a reef (and 45 minutes back in heavy rain)
– Had a 45 minutes night boat ride with millions stars in a black sky
– Have made amazing helicopter flights with my wife and daughter
– Visited very good Japanese, Thai, Italian and local restaurants. Sashimi and spicy green curry with shrimps are my favorites!
– Had a room with an amazing view and our own (hotel) beach
– Saw sharks and large turtles
– We have seen nothing like this before!
I specifically would like to thank Navot Bornovski, Rich Grimm and Regan Tetlow to make this all happen!
In the next weeks I will make a couple of short videos about our skydives and other experiences “on, above and under” this paradise.
I will be back……..happy are those who dream dreams and are ready to pay the price to make them come true………. 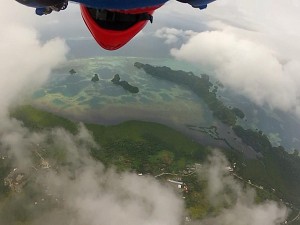 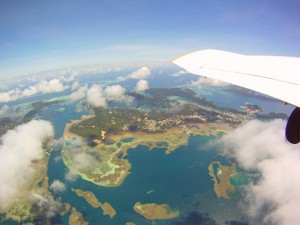