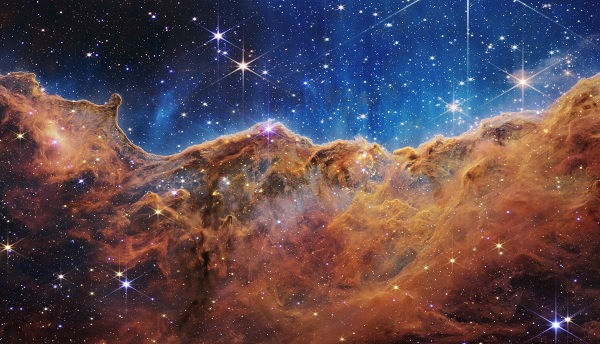 By reading this blog I like to share a personal story with a strong link to my role as Global Program Director.

In the mid-seventies, when I was around 12 years old, I have read the book “Cosmos” from Carl Sagan (1934 – 1996) and bought my own relative small telescope. Since that time I am inspired and thrilled about all wonders in our own solar system, the Milky Way, Nebulas, Galaxies, the Universe and possible parallel universes etc. This means that next to the fact that I follow NASA, Hubble, SpaceX and many others I also love to look at night to our visible stars and wonder where and how other forms of life exist. Will “they” look back at us? 🙂 That life is innumerable and present in many forms (just like Carl Sagan believed) is not a question for me but a fact.

Reading the above, you will imagine that I am very happy with the extremely good working JWST infra-red telescope operating in Lagrange point 2 (L2). I have watched many movies and have seen multiple live broadcasts regarding JWST on YouTube and other socials.

I am not only interested in the science and new territories to be revealed. As a global program director I am also interested in this enormous international program. The JWST took more than 30 years to be built by over 1200 specialist and with a total spend of more than 10.000.000.000 US Dollar. How did they do this? Which program structure and/or methodology have they used? At the nature of a program at this impressive scale and complexity they have used waterfall program management (estimated plan, budget, focus on quality first etc.). Yes also with the enormous overrun as no one would have been able to “properly” estimate such a massive and complex program. At the moment we cannot travel to the future and managing a program is not the movie “Back to the Future”! 🙂 Next to that they also have used Agile, with a daily stand-up etc. as was shown in the multiple movies. Of course Agile and/or SAFe has been used at several subcontractors developing high tech components used in the JWST.

What the JWST program also has been made clear is that the several project managers are true specialists. Not only in their project management skills, but also in the subject they are responsible for. What I don’t like is that project managers often mention to me, that they don’t need understand the subject of a project they manage. “I have specialists for that”. I totally disagree with this as I know from my own experiences in my extensive PM career and as an International IPMA Assessor, that knowing lots of details will make you a better project manager.

I cannot wait to see groundbreaking discoveries in the next couple of month and years by scientists using the data delivered by the James Webb Telescope!

Please see the first mind blowing footage of our universe below delivered by JWST as released on July 12, 2022